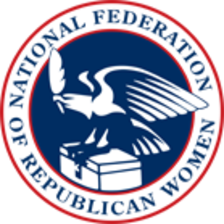 Benefits of Being Federated 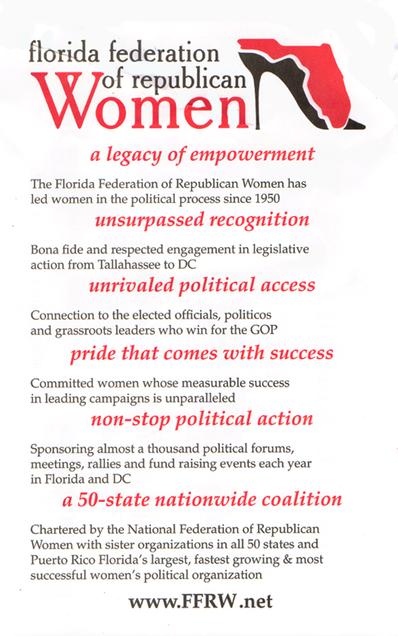 Who are the Women of the National Federation and

The Federation of Republican Women has a strong and long standing history and tradition in our nation. Originally inspired by the Republican platform of 1872, the oldest unit was  founded in Salt Lake City in the late 1800’s. In 1937, 38 women members of the Republican National Committee met to discuss the desirability becoming Federated.

At a conference in the Palmer House in Chicago the following September, the NFRW adopted the ideals to foster and encourage loyalty to the Republican Party and the ideas for which it stands; to foster cooperation between independent groups and the regular party organization, which both work for the same objectives, namely sound government; to promote interchange of ideas and experiences of various clubs to the end that the policies which have proved particularly effective in one state may be adopted in another and to encourage a national attitude and approach to the problems facing the Republican Party.

These policies and the interchange of ideas are the backbone of the Federation, which is made up of over 100,000 members in all 50 states, in Washington, DC, Guam, Puerto Rico and the Virgin Islands. It is the opportunity to share, promote and encourage with these women which gives the Federation its strength.

The CAP Alert (Comprehensive Advocacy Program) monitors current legislative issues and Republican initiatives and keeps members alerted and informed. The NFRW President and Board participate with and meet regularly with the Republican National Committee. By being a  club chartered with the Florida Federation of Republican Women, which is chartered by the National Federation of Republican Women, we have guidelines, structure, knowledge,  experience and support to help us all work toward our common goal of sound government and the ideals fostered in 1938 in Chicago.

The NFRW Emblem is the American Eagle, king of birds, holding a quill pen and standing guard over our most treasured tool of democracy: the ballot box. This portrays the Federation’s interest in the protection and integrity of our electoral process. Brevard Federated Republican Women is the only Federated club in Brevard County.