​The Brevard Federated Republican Women have established a scholarship in the amount of $1,000 in honor of long time member and former BFRW Legislative Chairwoman Lillian Banks.

Any female or male high school student who is a registered Republican is eligible to apply; applications are submitted to the BFRW Board by for review and selection of the recipient.  A copy of the voter registration card must be provided with the application. Preferably, the candidate is a resident of Brevard County. However, this requirement may be waived at the discretion of the BFRW board members. Applicants must be enrolled in either an Associate or Baccalaureate Degree program at an accredited educational institution. Proof of enrollment must be provided.

Each potential recipient must complete the official application form. The application form is available on the official BFRW website, www.brevardfederatedrepublicanwomen.org. An official copy of the most recent high school/college transcript must be presented in a sealed envelope from the issuing agency. The grade point average and scale should be clearly indicated on the transcript.

Three letters of recommendation including the name, address, and phone number for the author of each letter are required. (At least one letter should come from a representative of the applicant’s high school/college, or the agency issuing the transcript. One letter should come from an agency/organization where the applicant has performed volunteer/community service, been a volunteer in a political campaign/election, or been actively involved in the legislative process. It is highly  suggested that a record be kept of volunteer service and the supervisor in order to facilitate meeting this requirement.)

A one-page, typed essay written by the applicant stating the reason the applicant wishes to be considered for this scholarship and his/her career goals should also be included.

Other considerations to be included:  Awards or honors received by the applicant.
Questions may be directed to Dixie Riepl at driepl6871@gmail.com the Scholarship Chairperson at 281-740-3080.

Lillian Banks came from a large mid-western farming family in the late ‘20s. It was tough living, but she was able to attend school and some college before a dashing Lieutenant in the Army swept her of her feet and took her to Tokyo, Japan at the conclusion of WWII. She adapted well to being the wife of an Army officer and became an award winning equestrian and mother to her first son while in Japan. Her life became the typical Army officer wife’s life of moving a family every three to four years. She coordinated Officers Wives Club events and hobnobbed and entertained General Officers, Officers and Enlisted personnel. She did all this gracefully and still managed to add and raise two more sons for a total of three. During this time my father was also deployed during Viet Nam and she endured long tours while dad was away, still raising three boys alone.

She was able to move all over the country with dad, with posts also including Hawaii and Belgium. As the boys became older she was able to branch out into work full-time and became a civil servant. She was accomplished in her work as an assistant office manager and exceled at what would have been called the running of a business back in the early ‘70s (No computers). She garnered respect from her peers and managers and that was no easy accomplishment back then as women still were fighting for equal rights in a man’s business world.

When dad retired and we moved to Florida in 1976 my mother really got started in the business world. She got her Real Estate license and got to work for some of the local realtors in the Merritt Island area.  As always once she got her groove she excelled in this environment. Multiple awards for listings, sales and the such came after that. But, she felt she was being held back. She decided to become a mortgage agent and opened up her own real estate business, “L Banks Realty and Leasing”. Dad helped as the Accountant and she rivaled her previous employers in the Real Estate business. The reason? Integrity, Ethics and the willingness to work hard to succeed.

It was in her dealings as a Realtor that she became interested in Politics. Being a business woman in Real Estate she understood that politics had a direct impact on her success. So she invested in people that would help her and other likeminded individuals/groups be successful.

She started with helping to campaign for candidates. But that wasn’t enough for this “sparkplug” and she became a staunch advocate for conservative groups in Florida and the County. She wanted to hold our elected officials accountable to the people that put them in office.  It was many a time I went to meetings with her and heard her speak. I loved watching her at the County Commissioner’s meetings. She was relentless in making her points and moving agendas. I recall reading many letters to the Editors in the newspaper debating conservative values, like private property rights, balanced budget and fair use of tax money on conservative issues without going too far overboard. She went toe to toe with Editors, Public Workers, County Commissioners and anyone she could get in front of to make her points. She became famous or infamous depending on what side you were leaning and everyone in the local political arena knew “Lil”.

She was awarded a flag that flew over the State Capitol as a gift for her tireless efforts to support conservative values and was well respected by even her opponents.

You had to give it to her, she was committed. 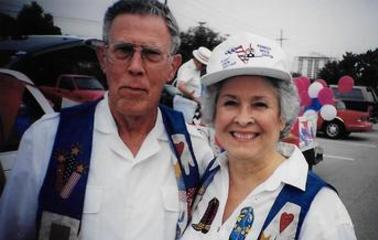 Male or Female high school senior, including home-schooled students, must be U.S. Citizen and Registered Republican; high school graduate between ages of 17 and 21 years old; resident of Brevard County.  Applicant may also be a current college student in a local college or enrolled in a trade school and no more than 21 years old.

The completed BFRW Scholarship Application is appropriate for either the Lillian Banks Scholarship or the Barbara Davis Scholarship.  To be considered for each of these, need to only submit one application; however, only one scholarship will be awarded to one applicant.

Requirements:
1. High School Level Grades, Class Rank and High School Graduation Date.
2. SAT/ACT Test Results (Not needed for Trade School Applicants)
3. High School Awards, Honors and Activities.
4. If Dual Enrolled at Eastern Florida State College (EFSC), grades are to be submitted in a sealed envelope, degree seeking and expected graduation date.
5. List of Community Service and/or Employment.
6. Three (3) recommendation letters (From an educator, church/synagogue associate, an employer and/or a volunteer organization associate).
7. Copy of letter from the college to which applicant has been accepted.
8. Copy of voter registration card.
9. One page Essay, signed and dated, to include college course interests or trade school interests.  Also , your future goals and plans to be a productive citizen on behalf of the Country.