Sharon jumped right in - appeared she had been involved 4 years!

We had a great time; well received and very much appreciated

Coleen Ward is the best; she thought the children should

hold their books over their faces 4 anonymity

re: no parental authorization that their child be photographed.

Additional elementary schools are scheduled in the near future.

In 1950, the Melbourne Women’s Republican Club was founded.  In 2012, the organization became the Brevard Federated Republican Women [BFRW], dedicated to caring for America, support of our military and veterans as well as staunch supporters of education.  The BFRW raises funds all year long to benefit the programs that are important to the organization.

During October 2018, the organization is proud that it provided 330 “A Student’s Dictionary & Gazetteer, 24th edition” to four (4) Brevard County Elementary Schools. The books are published by The Dictionary Project, Inc. ©2018, located in Charleston, South Carolina.  The amazing cover, provided by NASA, is the images of our Earth and the astronauts.  These books are much more than a dictionary; it contains nine parts of speech, punctuation and pronunciation sections, 365 Dictionary pages, and one full page provides the longest word in the English language, consisting of 1,909 letters.  This word is the term for the formula C1289H2051N343O375S8 - A Tryptophan synthetase A protein, an enzyme that has 267 amino acids!

The book devotes several pages to The United States Flag, including the first American Flag sewed by Betsy Ross in May 1776 and the current 50-star Flag, which was raised for the first time on July 4, 1960, at Fort McHenry National Monument, when Hawaii joined the Union.   A Civics Lesson is stated along with the Declaration of Independence of the 13 Colonies, on July 4, 1776.

All 50 States of the Union are listed, which includes the States’ Capitals, size in square miles, Population, Dates of Statehood, Mottos, Trees, Birds, Flowers and Songs.   There are sections of facts regarding all world countries and locations, the Planets and its Summaries, which include beautiful pictures.  It is interesting to note that “The American Manual Alphabet,” more commonly known as sign language, was worthy of inclusion; the students were quite excited to view this section and several students, at the 3rd grade level, are proficient in sign language!  Very impressive, indeed!

The Dictionary is current in that President Donald J. Trump [page 431] is included as the 45th President within the pages of the United States Presidents beginning with George Washington [pages 410 to 431].

The students were informed that the books were theirs to keep.  We found that there are many students who did not own a dictionary; their classroom educators had two to three dictionaries to share with the entire class. The BFRW raised enough funds to provide every 3rd grade teacher with a book, again this year, which was much appreciated.  Several teachers have a “Dictionary Scavenger Hunt” that explores several questions for the students to answer.

The experience that the BFRW presenters garnered was invaluable in that the students are astute, eager to learn and articulated their feelings very well during the short time period that was spent with each elementary school.

The idea for The Dictionary Project began in 1992 with approximately 50 dictionaries to children residing in Savannah, Georgia.  Early on, the project became well-known and fund-raising efforts quickly heightened in order to purchase more dictionaries to benefit more and more schoolchildren.  A 501(c) (3) nonprofit Association was formed in 1995, along with a Board of Directors, and “The Dictionary Project” was born.

“The goal of The Dictionary Project is to ensure that everyone will be able to enjoy the benefits of owning a dictionary.”  It is, therefore, quite understandable that the BFRW organization is inspired to assist with the efforts to provide a dictionary to every 3rd grade student in the United States!

The BFRW has been participating in The Dictionary Project since 2012; during this time, 2,250 Dictionaries have been donated to Brevard County, Florida, Elementary Schools. 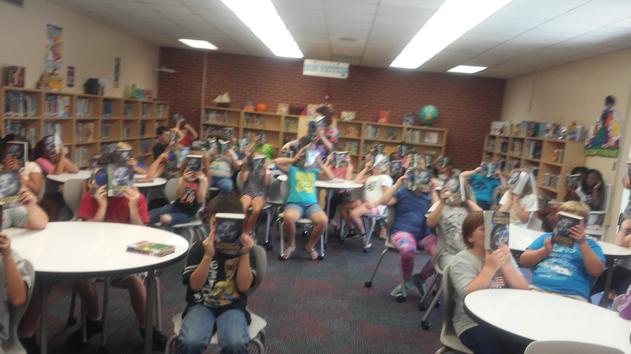 Marlene Frye at Creel Elementary after 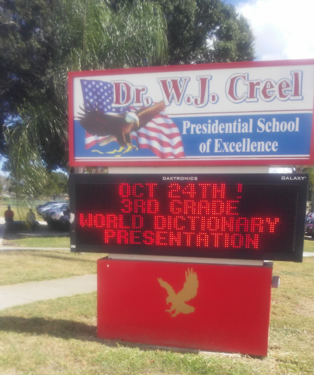 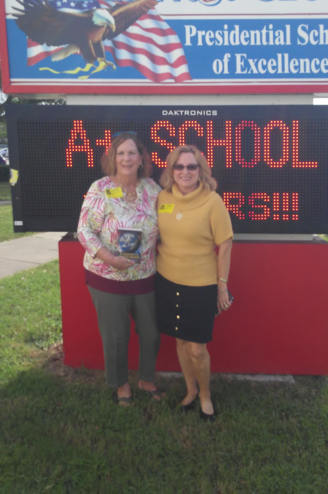 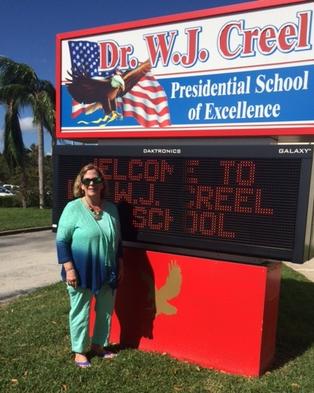 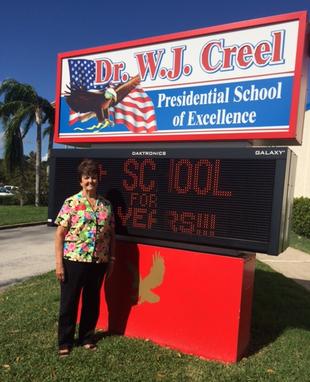